"Instrumental Quest is supported by its readers. Please assume all links are affiliate links. If you purchase something from one of our links we make a small commission from Amazon. Thank You!" 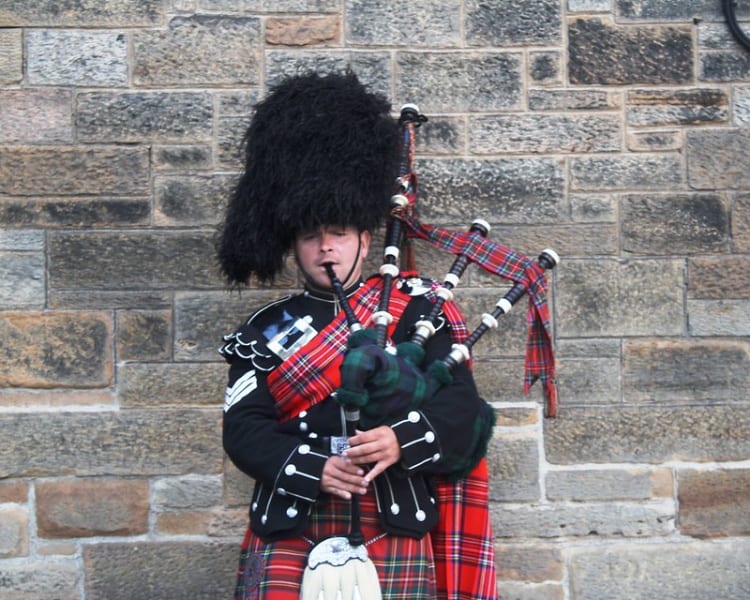 Bagpipes, most commonly hailing from Scotland but played in many places all over the world, are a woodwind instrument that utilize reeds, pipes, and a bag of air to create musical sounds. Most people assume that bagpipes are native to Scotland and the Celtic culture, but historic evidence actually suggests that bagpipes were brought to Scotland by the Romans many centuries ago.

Bagpipes are known for making quite a controversial sound, and the resulting noise from playing a bagpipe is not considered pleasant by everyone who hears it.

So, why do bagpipes sound out of tune? Bagpipes have drones, and three pipes on them, which send out one continuous tune. Thus, you can’t have a break between the notes causing the tune to sound off at times.

Those who love bagpipe music will certainly insist on its merits, but those who do not favor bagpipes often claim that they sound out of tune and upset their ears.

A large part of the reason why bagpipe music is considered strange or unpleasant to many ears is due to its construction and usage. In short, the bag and the various pipes that a bagpipe is composed of are the reason why they create such unique music, which often sounds out of tune to many ears.

Bagpipes have a bag that is full of air, which is usually filled by the player blowing into it via a tube. In order to play the instrument, the bag of air is squeezed and the air is forced out through a flute-like pipe. This is how different notes are created; the sound is referred to as a chanter. It makes sense to think of the chanter as the melody.

If you are looking for a great bagpipe kit for beginners, I highly recommend this one from Amazon. It has everything you need to get started, and even comes with a hard carry case!

A bagpipe can play exactly nine notes from G to A, but it is not capable of playing sharps or flats the way that many other types of instruments can. When air is squeezed out of the bag to play a song, air is also forced out of a small number of other tubes attached to the bag. These tubes make their own sounds, which are called drones.

Each tube creates a drone on a different note, which stays consistent throughout the entire time the bagpipe is being played. Thus, while different notes can be played via the chanter, the drone or drones will not (and cannot) be changed. The drones are considered to be the harmony to the chanter and are why the bagpipe’s music is considered so distinctive.

Are Bagpipes Consistently Out of Tune?

It is undeniable that a bagpipe is a very unique type of musical instrument. One of the ways it differs from other woodwinds is that the chanter can never be silent when the bagpipe is being played, meaning that it’s not possible for there to be rests between notes. Rests are common in music, so bagpipe music has to be written differently with this quirk in mind.

Furthermore, the volume of the bagpipe cannot be changed. So there is no possible way to play a bagpipe quietly, which is perhaps one of the reasons why some listeners find them so unfavorable. In fact, bagpipes were originally not even created to make music, but to frighten battlefield enemies during war.

However, despite the fact that bagpipes often sound like they are playing out of tune, they are usually not. The reason that they sound as if they are out of tune is mostly due to the aforementioned droning sound that plays continuously throughout the melody. Some drones can sound fairly flat, which affects the overall tone of the other notes being played.

Thus, the combination of drones with the chanter may produce a noise that is not as melodically clear as other woodwind instruments like a flute or clarinet. Even an extremely skilled player with a perfectly tuned instrument might not escape scrutiny from bagpipe critics who insist that the sound is out of tune. However, appreciative ears will know that what makes bagpipes music unique is also what makes it beautiful.

You can also purchase a separate chanter kit like this one, to learn and practice how to play a bagpipe. You can eventually graduate to a bagpipe after you master the chanters.

Can You Tune a Bagpipe?

Despite the fact that many bagpipes are actually perfectly in pitch, it is still possible for bagpipes to fall out of tune. In fact, there is no doubt that an out of tune bagpipe will horrify even the most enthusiastic bagpipe fanatic. Perhaps it is the noise of an untuned bagpipe that turns people away from attempting to enjoy the instrument in the first place.

Thankfully, it is possible to tune a bagpipe. However, the process is not easy. It requires a very skilled musical ear and must be done by someone who is well-versed in the construction and playing of bagpipes. Sometimes, even people who have been playing bagpipes for many years will still opt to have their instrument tuned professionally.

If you want to learn to how to properly tune a bagpipe, check out this bagpipe tuning demonstration audio. It definitely will help you get the tune right.

Tuning a bagpipe is quite a complicated and often ambiguous process. In terms of bagpipes, there really isn’t a clear-cut definition of what an “in tune” instrument sounds like, except that it should generally abide by the principle that it sounds as good as possible. Most people can agree on what generally sounds bad, so that overall noise is what is avoided in the tuning process.

Tuning a bagpipe is accomplished by attaining a pleasant balance between the chanter and the drone by adjusting the various tubes and pipes on the instrument. Because bagpipes are so unique and require special musical skill to play exceptionally well, it is no wonder why tuning bagpipes would also be a fairly complex and involved process

Bagpipes are amazing and unique instruments. Although some people don’t like the sound, some people are swayed by the tune it creates. In this article we learned that bagpipes have drones and three cheaters on them, that play one continuous tune.

We also learned that a bagpipe can go out of tune from time to time, so make sure to follow the recommended options to enhance the longevity of your bagpipe. Until next time!

We are Instrumental Quest, a team dedicated to providing reviews, how to guides, and helpful information to those interested in a wide variety of musical instruments.

link to Do Acoustic Guitars Wear Out?

Playing guitar is such an art form for many people, and a lot of artists wonder what the lifespan of an acoustic guitar is. Since guitars are being handled constantly, it's normal for them to wear...

Continue Reading
link to Do Trumpet Valves Wear Out?

Do you need to worry about your trumpet wearing out? At what point is your trumpet valve officially worn-out, and in need of replacement? Remember that normal wear-and-tear on your trumpet’s...

Welcome to Instrumental Quest - We are a blog all about Musical Instruments. Some of our specialties include the Guitar, Piano, Keyboard, Woodwind, and so much more!

All information on this site is thoroughly researched and applied to give the best content possible for each topic.

InstrumentalQuest.com is a participant in the Amazon Services LLC Associates Program, an affiliate advertising program designed to provide a means for sites to earn advertising fees by advertising and linking to Amazon.com. As an Amazon Associate, I earn from qualifying purchases.